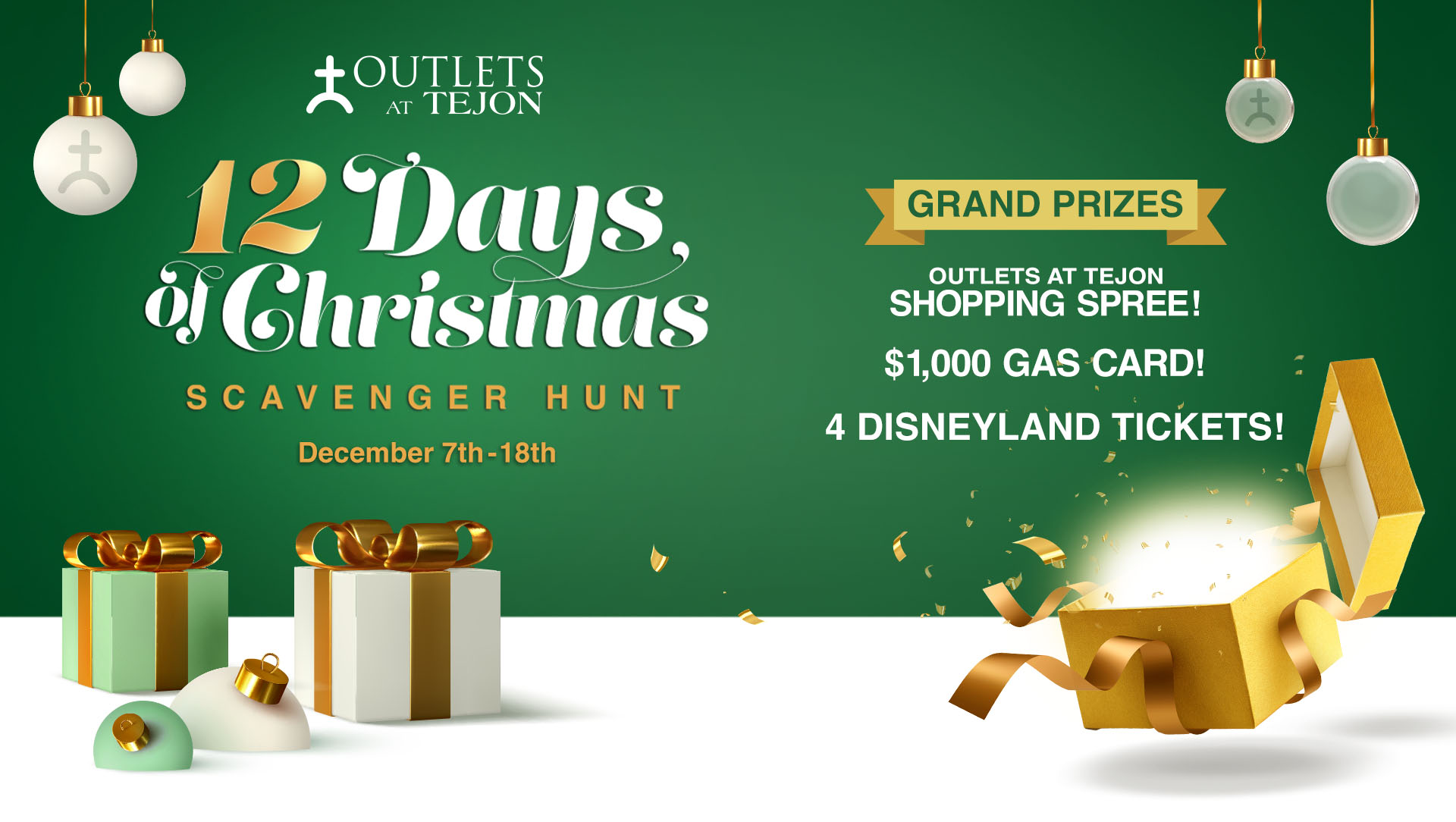 12 DAYS OF CHRISTMAS AT THE OUTLETS AT TEJON - OFFICIAL RULES

NO PURCHASE NECESSARY TO ENTER OR WIN. MAKING A PURCHASE OR PAYMENT OF ANY KIND WILL NOT INCREASE YOUR CHANCES OF WINNING. VOID WHERE PROHIBITED OR RESTRICTED BY LAW.

The sponsor of this Promotion is Outlets at Tejon ("Sponsor"). By participating in the Promotion, each Entrant unconditionally accepts and agrees to comply with and abide by these Official Rules, the Sponsor’s Privacy Policy, set forth herein, and the decisions of the Sponsor, which shall be final and binding in all respects. Sponsor is responsible for the collection, submission or processing of Entries and the overall administration of the Promotion. Entrants should look solely to Sponsor with any questions, comments or problems related to the Promotion. Sponsor may be reached by phone at 661-858-2155 during the Promotion Period.

2. ELIGIBILITY: Open to legal residents of The United States of age 18 or over (the \"Entrant\"). Sponsor, and their respective parents, subsidiaries, affiliates, distributors, retailers, sales representatives, advertising and promotion agencies and each of their respective officers, directors and employees (the \"Promotion Entities\"), are ineligible to enter the promotion or win a prize. Household Members and Immediate Family Members of such individuals are not eligible to enter or win. "Household Members" shall mean those people who share the same residence at least three months a year. "Immediate Family Members" shall mean parents, step-parents, legal guardians, children, step-children, siblings, step-siblings, or spouses. This promotion is subject to all applicable federal, state and local laws and regulations and is void where prohibited or restricted by law.

3. PRIZES: Guests can only claim one (1) gift during the promotion (from 11/7-12/18). The actual gifts and value of each gift will vary. Descriptions of gifts will be separately announced. Gifts will only be placed in common areas of the Outlets of Tejon walkways. Guests must bring gift boxes to Guest Services, Suite 170, to claim their prize. In addition to complying with any local, State or Federal law, winners must provide a valid driver’s license or student ID to claim the prize.
Prizes cannot be transferred, redeemed for cash or substituted by the winner. Sponsor reserves the right in its sole and absolute discretion to award a substitute prize of equal or greater value if a prize described in these Official Rules is unavailable or cannot be awarded, in whole or in part, for any reason. Sponsor makes no representation or warranty concerning the appearance, safety or performance of any prize awarded. Restrictions, conditions, and limitations may apply. Sponsor will not replace any lost or stolen prize items.
This Promotion is open to legal residents of The United States of America. Prize must be claimed at the Outlets at Tejon Guest Services upon finding the prize/gift. All federal, state and/or local taxes, fees, and surcharges are the sole responsibility of the prize winner; notwithstanding, awarding of any prize may be subject to Sponsor collecting tax information and winner receiving an IRS Form 1099 at the end of the calendar year in the event the winner receives a gift totaling in excess of $600 during any one year period. Failure to comply with the Official Rules will result in forfeiture of the prize.

4. HOW TO ENTER: From December 7th through December 18th, guests are invited to search for gift box surprises that will be placed throughout the shopping center in public areas outside of the stores, and guests 16 and over are invited to seek out these special packages to win the prize inside. The gifts must be redeemable at Guest Services suite 170 no later than 8 p.m. Pacific Standard Time, December 18, 2022.
5. PRIVACY: Any personal information supplied by you will be subject to the privacy policy of the Sponsor posted at https://www.tejonoutlets.com/privacy-policy. By entering the Promotion, you grant Sponsor permission to share your email address and any other personally identifiable information with the other Promotion Entities for the purpose of administration and prize fulfillment, including use in a publicly available Winners list. Winners will be featured on Outlets at Tejon marketing. Subject to the privacy policy, Sponsor shall have the right to use the winner’s voice, likeness, image or statement about the contest for publicity, news, advertising, promotional purposes or the like, without any further notice, review, consent, compensation or renumeration.

6. LIMITATION OF LIABILITY: Sponsor assumes no responsibility or liability for (a) any incorrect or inaccurate entry information, or for any faulty or failed electronic data transmissions; (b) any unauthorized access to, or theft, destruction or alteration of entries at any point in the operation of this Promotion; (c) any technical malfunction, failure, error, omission, interruption, deletion, defect, delay in operation or communications line failure, regardless of cause, with regard to any equipment, systems, networks, lines, satellites, servers, camera, computers or providers utilized in any aspect of the operation of the Promotion; (d) inaccessibility or unavailability of any network or wireless service, the Internet or website or any combination thereof; (e) suspended or discontinued Internet, wireless or landline phone service; or (f) any injury or damage to participant's or to any other person’s computer or mobile device which may be related to or resulting from any attempt to participate in the Promotion or download of any materials in the Promotion.

If, for any reason, the Promotion is not capable of running as planned for reasons which may include without limitation, infection by computer virus, tampering, unauthorized intervention, fraud, technical failures, or any other causes which may corrupt or affect the administration, security, fairness, integrity or proper conduct of this Promotion, the Sponsor reserves the right at its sole discretion to cancel, terminate, modify or suspend the Promotion in whole or in part. In such event, Sponsor shall immediately suspend the promotion, and Sponsor reserves the right to award any remaining prizes (up to the total ARV as set forth in these Official Rules) in a manner deemed fair and equitable by Sponsor. In the event a dispute arises regarding specific individuals to receive a gift, winners will be declared by Sponsor in its sole and absolute discretion. Sponsor and Released Parties shall not have any further liability to any participant in connection with the Promotion.

< Back to Events/Promotions
About Cookies/Privacy Reminder

This website uses cookies and other trackers to collect data that enhances and improves your experience. We respect your right to privacy and allow you to choose which cookies track your data.  Please note that disabling some types of cookies may impact the site and the services we offer. To request the right to know or delete what data has been collected about you, please CONTACT US.